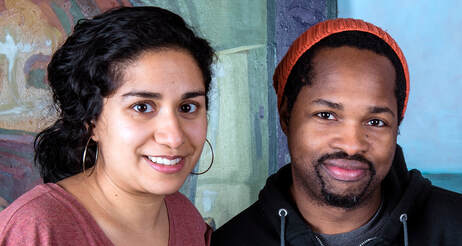 AMBIDEXTROUS is made up of husband and wife artists Andrae Green and Priya Nadkarni Green. Together they draw from their individual practices as painters to create public art, murals and special projects. Their aim is to inspire positivity, beauty and excitement through their collaborative work. Projects often interface directly with the public and through participation from student assistants. Their studios can be found in their Springfield, Massachusetts home.

Andrae Green hails from Kingston, Jamaica. In 2004, he received a BFA from Edna Manley College of Visual and Performing Arts in Kingston, Jamaica. He later received his MFA in 2008 from the New York Academy of Art. Andrae has shown his paintings internationally and has represented Jamaica at the Beijing Biennial in 2013, 2015, and 2017. He also represented the U.S. at the Salon des Beaux Arts held at the Carrousel de Louvre in Paris in 2013. He continues to show his work extensively in the U.S. and internationally. To view his work and read more, visit his website at www.andraegreen.com.

Priya Green is originally from New Jersey where she received her BFA at Rutgers University. She later received her MFA from University of Massachusetts Amherst, where she was awarded a graduate school fellowship in her final year. She has shown her work in both solo and group exhibitions at spaces such as the Kimmel Center Galleries at NYU, Jersey City Museum, Cuchifritos Gallery NYC, Zimmerli Art Museum, Concordia College, and the School of the Art Institute in Chicago. She is a recipient of the international Elizabeth Greenshields Foundation Grant and was a 2013 artist-in-residence at the Blue Mountain Center. To view her work and read more, visit her website at www.priyanadkarni.com.
​
All images are copyright ©AMBIDEXTROUS 2019.